Three Free Concerts Slated as Part of “2021-We Will Sing On!” Tour

Sugar Land, TX – The award-winning Fort Bend Boys Choir of Texas makes their Dallas Arts District debut as part of their 2021-We Will Sing On! summer performance tour Tuesday, June 8 at the Cathedral Guadalupe located at 2215 Ross Avenue 75201. The concert, to be held in the sanctuary, is free and open to the public. Fort Bend Boys Choir has two additional concerts scheduled in their 2021-We Will Sing On! summer performance tour: Sunday, June 6 at 4:00 p.m. in College Station’s A&M United Methodist Church and Monday, June 7 at 7:00 p.m. at St. Monica Catholic Church in Dallas. Covid-19 safety protocols will be in effect for all concerts.

“We feel so fortunate to be able to tour and sing for the community, especially in the historic Dallas Arts District, after this year of COVID uncertainty,” said William R. Adams, founder and artistic director. “We’ve adapted to wearing masks and social distancing while singing, quite successfully, even performing publicly for several holiday concerts. We have not sung in Dallas since 1984 and we are extremely excited for this opportunity. Our Tour Choirboys are thrilled to perform in Dallas.”

This 39-year-old nonprofit organization has ties to the Dallas area, with some choir alumni living and going to school here. One such alumnus is John Holiday who was a 2020 Top 5 finalist on “The Voice!” He received a Bachelor of Music in Vocal Performance from Southern Methodist University and is an accomplished operatic countertenor who has performed with a number of opera companies. He recently performed for the Dallas Opera’s “Welcome Back” Song Series in April 2021 and is scheduled to return to the Dallas Opera in March 2022. “Being a member changed my life exponentially. Not only have I made lifelong friends but the performance tours through the USA and abroad helped prepare me for the professional life I have today,” said Holiday. “Mr. Adams had great faith in me and one of the lessons he taught me as a choirboy is one I still use to this day – No matter whether I am singing to an audience of one or one thousand, I will always give it my all.” John says, “I encourage you to run, not walk, to one of their concerts and you’ll see why your life will be changed too. I am so happy that the Fort Bend Boys Choir of Texas is making their Dallas Arts District debut and bringing some hope and inspiration to the community.”

“When Mr. Adams reached out to me to let me know they were planning this concert series, I was immediately taken back to my time in the choir. I remembered how much I gained from my experience singing and performing with the Tour Choir,” said City of Dallas District One Arts and Culture Advisory Commissioner, Augustine “Tino” Jalomo and SMU Meadows School of the Arts graduate. “Of course, I did not realize it then, but I learned about the discipline it takes to be a performing member in an ensemble and having the members depend on you to know your music, know your part and movement even. I count Mr. Adams among those favorite teachers I had in life and I Iook forward to seeing him conduct and to hearing the choir in the beautiful Cathedral Guadalupe in the Dallas Arts District.” Jalomo was one of the original members of the Fort Bend Boys Choir of Texas and sang for three years.

For more information about the Fort Bend Boys Choir of Texas and their performance schedule, visit www.fbbctx.org or call (281) 240-3800. You can also find them on Facebook, YouTube, and Twitter.

About the Fort Bend Boys Choir of Texas

Founded in 1982, the Fort Bend Boys Choir of Texas began as one choir with 45 boys and grew to 125-150 boys in four ensembles. The Fort Bend Boys Choir of Texas has been recognized for many artistic accomplishments including performing with notable performers like Dolly Parton, Willie Nelson, Kenny Rogers, the Manhattan Transfer, Shirley Jones, and Audra MacDonald. They have also performed with the English Symphony, Mexico City Symphony, Houston Symphony, and other notable symphony orchestras. A recording artist of ten (10) CDs, the Fort Bend Boys Choir has also sung for Pope John Paul II, 3 U.S. Presidents and won an “Addy” award for television commercial excellence. Recently, the Tour Choir’s unique version of Beethoven’s Ode to Joy from their Heavenly Euphoria CD was featured in the 2020 Polish movie called “The Hater.” In addition, the choirboys recorded six songs for the critically acclaimed summer 2020 release of a role-playing game called Wasteland 3. 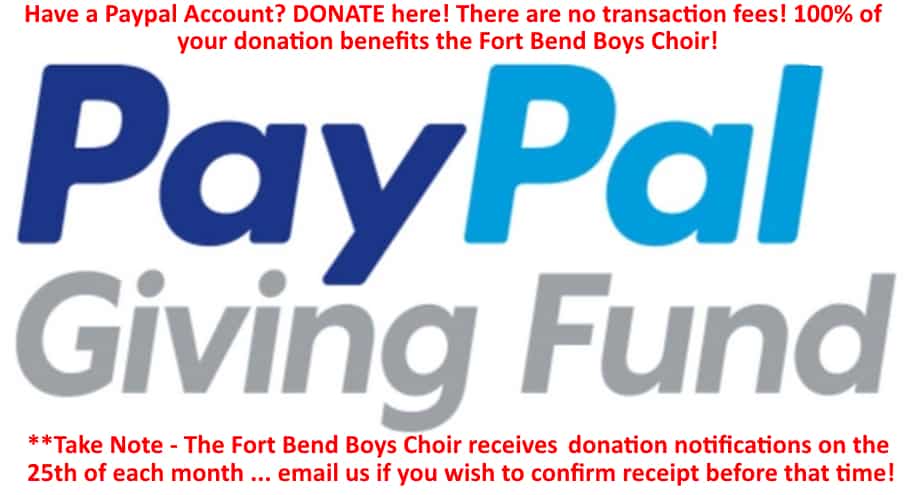